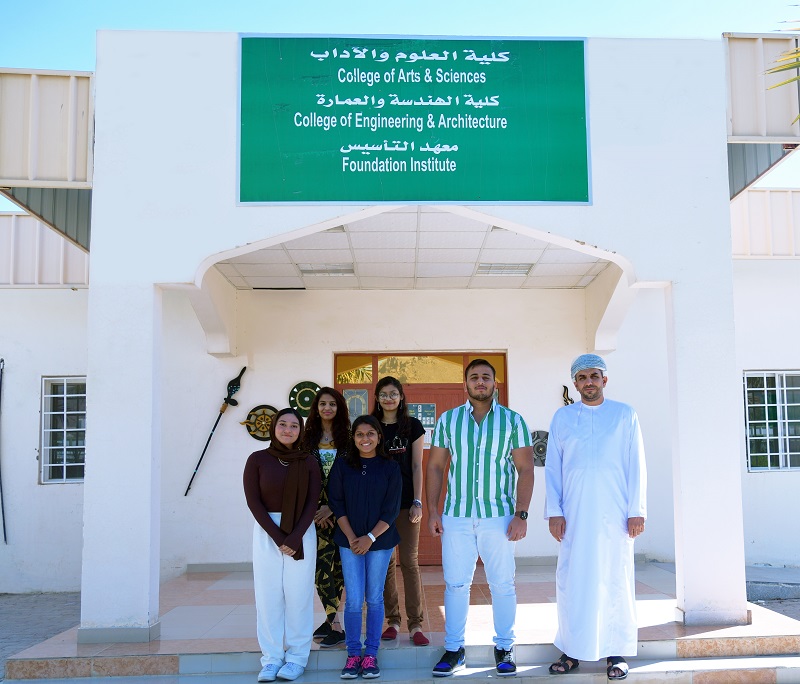 In the fall semester 2021, six international students joined this course with Dr. Nasser Al-Saqri (Assistant Professor of UNESCO Chair in Aflaj Studies at the university). The students showed great enthusiasm in completing research related to the subject, which varied in topics as we will present in this article.

The beginnings of Islam date back to the 7th centuryin the year 610. Islam started in Mecca, in modern-day Saudi Arabia, during the time of the Prophet Muhammad's life at the age of 40. Muslims believe that the Prophet Muhammad is the last and final messenger and prophet of God, who began receiving direct verbal revelations in 610 CE. The first revealed verses were the first five verses of sura Al-Alaq that the archangel Jibril brought from God to the Prophet Muhammad in the cave Mount Hira. The Islamic culture is based on the Qur’an and the Sunnah (Ahadis), but it is also based on human experience and learning. The Quran is considered to be the source of many aspects of Islamic culture. Certain acts or rituals that Muslims do almost subconsciously are actually encouraged, or allowed by Allah, or mandated in the Quran. Faith, spiritual perfection and practice are considered to be the most important variables which Islam is based on. The three key things are associated with peace and mercy. Finally, it should be noted that Muhammad’s teachings must not be regarded as a religion, as the Prophet Muhammad’s major aim is to encompass all people and show them the ways which lead to Paradise. The key values highlighted by the Prophet Mohammed are such as treating parents with respect, praying five times each day, and fasting during the month of Ramadan. Islam has been crafted and explained on the basis of an archaeological and theoretical perspective that builds a relationship between the concepts of craft and identity. Both of them are concepts very widely used in archaeological and anthropological theory and they have often been linked in field studies. Modern Islam is divided into many sects. While the tensions that led to the development of these sects were certainly present in the early history of Islam, it took centuries for different religious interpretations to become organized into clear schools of thought. As scholars compiled histories, laws, and philosophical treatises, the main schools of legal thought emerged. From the ninth century to the twelfth century, Islamic culture flourished and crystallized into what we now recognize as Islam.

College of Engineering and Architecture

Topic: The History and Culture of Islam & their Contribution to Global Civilization

My topic is about the history of Islam in a different period. Every civilization is a complex combination of achievements, failures, and traits. A civilization reflects a culture's philosophy and is analyzed through the prism of different factors. The Islamic Civilization is nowadays and was within the past an amalgam of a wide assortment of societies, made up of polities and nations from North Africa to the western edge of the Pacific Ocean, and from Central Asia to sub-Saharan Africa. Islam may be one of the world’s major monotheistic religions. It started within the early 7th century. Islam comes from the word “al-silm” which means peace and surrender. The God in Islam is alluded to as Allah, which in Arabic implies “the god” or “the deity”. An individual who accepts the religion of Islam is called a Muslim. The Prophet of Islam is Muhammad(Peace be upon him). The origin of Islam can be traced back to different periods like pre-Islamic world, the first and the second Abbasid period, the Hispania period and Persian period. My topic also covers the contribution of Islam to different fields like arts, science, engineering, medicine, laws and so on. One may affirm that Islam has played an important role in the progress of the various forms of science, where Muslim innovations and concepts have been the driving force behind the advancement of humanity and its civilization. The investigations into different spheres of study have proved the enormous potential of the Eastern world and the value it has to the modern academia.

Topic: Islam’s Relationship with the West

Islam, like every other religion, must change and adapt to modernity, particularly to the economic and cultural power of a dominant West. Muslims' compatibility with Western cultural values relates to a larger subject of how they have adapted to historical realities in all of their host countries. The Islamic world is made up of people from many ethnic, cultural, and geographic backgrounds, and it faces the problem of bringing disparate national cultures together. The relationship betweenIslam and the West has been described as both positive and negative throughout history, with the former implying peaceful coexistence, cooperation, and mutual integration of cultural, scientific, and other elements from the other, and the latter implying mutual suspicion and even hostility. The West perceives Islam as backward, cruel, repressive, and restrictive, while Muslims view the West with doubt tinged with fear. They believe the West is continuallyplotting against them and is pursuing conspiracy agendas. Between the two groups, seeds of doubt and mistrust were sown, and clearing this mistrust and lack of mutual confidence will take a significant amount of effort.Therefore, it's important to identify the points of agreement and disagreement.

College of Arts and Sciences

Every year, Muslims throughout the world look forward to seeing the new crescent moon, which signals the beginning of Ramadan.The date of Ramadan changes every year. God revealed the Quran, Islam's sacred scripture, to the Prophet Muhammad during Ramadan on the "Night of Power" (Laylat al-Qadr), which is commemorated on one of the last ten nights of Ramadan, usually the 27th night, as "instruction for the people." For Muslims, Ramadan is a month of introspection, communal prayer at mosques, and Quran reading. God forgives previous sins for those who observe the holy month with fasting, prayer, and serious desire. The spiritual rewards of fasting are considered to be twofold during Ramadan. Before the first prayer of the day, the Fajr prayer, Muslims wake up for suhoor. After the sunset prayer, known as Maghreb, the evening meal, known as iftar, starts. Because the Prophet Mohammad broke his fast with dates and a glass of water, Muslims eat dates at suhoor and iftar. A person who is fasting must adhere to certain guidelines. At night, additional prayers known as tarawih prayers are performed in order to gain Allah's forgiveness. The completion of Ramadan is marked by Eid al-Fitr, the "Feast of Fast-Breaking”. Families then proceed to the local mosque, pray and greet everyone “Eid Mubarak”. During Eid al-Fitr, everyone dresses up, presents are exchanged, relative’s graves are visited, and people assemble for family dinners and mosque prayers. Ramadan is a month dedicated to contemplation and self-control. Fasting is said to be a method for purifying the spirit and cultivating empathy for those who are hungry and less fortunate in the world. Ramadan is also a powerful symbol of unity, since Muslims all across the world fast at the same time, uniting their families and friends. Muslims all around the world mark the occasion with colourful celebrations that are unique to their region, and this tradition has been passed down through the generations. They also have distinct food for breaking their fast in each nation, which makes each country unique.

Few of us know that today's powerful and prosperous Europe has gone through a long historical period known as the Dark Ages. It lasted for over a thousand years from the 5th century AD until the start of the Renaissance during the 14th century. It was during this period that Islamic civilization began with the emergence of Islam in 610 AD. This period of Islamic history lasted until the beginning of the 20th century. The period from the 7th to the 14th centuries is known in history as the Golden Age. During this era, Muslim scientists and other intellectuals have achieved great accomplishments in all fields, including modern medicine, chemistry and algebra. And in fact, the Islamic civilization brought Europe out of the Dark Ages to the Enlightenment and gave birth to its renaissance. Cultural achievements made during the Golden Age of Islamic Civilization were highlighted at the "1001 Inventions" Multidisciplinary Exhibition, launched in 2008 in the United Kingdom in partnership with the Foundation for Science, Technology and Civilization, a British-based non-profit organization. This exhibition has also been held in many places around the world. Unfortunately, many Western historians ignore this historic Islamic period. Similarly, the current media propaganda and the general public are of the opinion that Muslims have nothing but terrorism. The colleges and universities here teach that the greatness of the West has its roots in Greece and Rome, and that after a thousand years of sleep in the Dark Ages, Europe has miraculously revived its Greco-Roman heritage. And this rediscovery led them to the Enlightenment and Renaissance and later to the Scientific and Industrial Revolutions. If there is any mention of the Muslim world, they have only preserved the heritage of Greek philosophers which is transferred to Western countries.

College of Pharmacy and Nursing

Topic: The Role and Status of Women in Islam

My interest is in studying the role and status of women in Islam. Every woman is held in high regard in Islam. Women are granted special attention and are treated with respect and dignity; they have the same rights as men and, in fact, are in a superior position. Muslims believe that Islam bestowed rights on women, the most important of which being the right to life, which they had lost in the pre-Islamic period. Women must be handled with kindness and compassion, according to the Prophet Muhammad. In Islam, greater financial security is assured for women,as the woman has the right to work and spend her money as she wishes. She has no obligation to share her money with her husband or any other family members, although she may choose to do so out of good will. Women are subject to laws and requirements as men when it comes to praying, fasting, charity, pilgrimage, all five pillars of Islam, and doing good actions. They have proved several times throughout Islamic history that they are strong enough to stand in the way of Islam's opponents. Muslim women can accomplish anything and battle while adhering to Islam's principles. In my research, I have written about various topics related to women such as women's work, their marriage, inheritance, alimony, financial rights and education, in addition to the status of women in medieval times, honouring women for their role as mothers, etc.