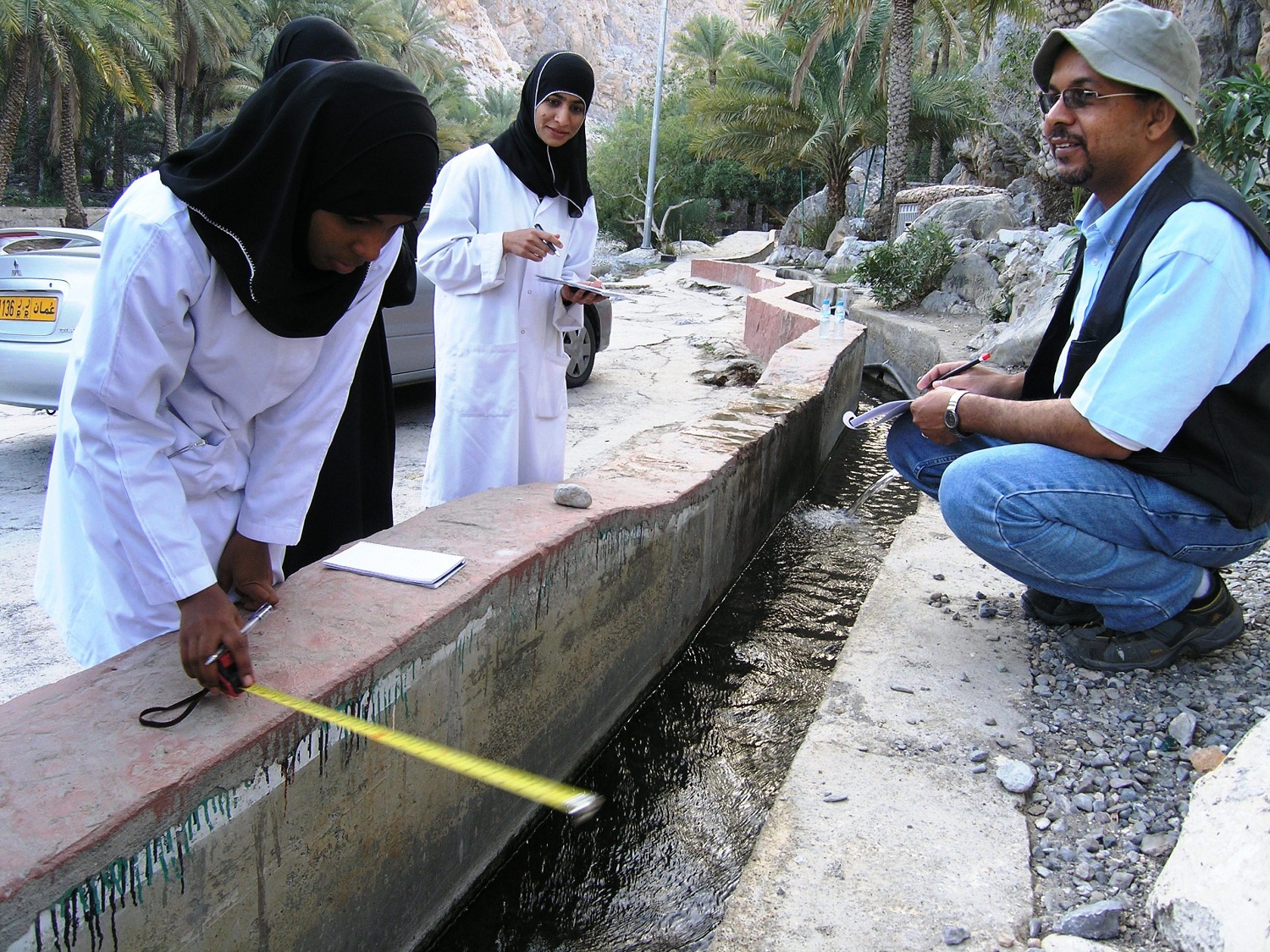 Oman receives very little rainfall per year making agricultural production almost fully dependant on irrigation. Aflaj systems have been utilized in Oman for hundreds of years. Oman has 4,112 falaj in which 3,108 are live aflaj. We can define the falaj (singular of aflaj), as a canal system, which supplies water for a community of farmers for domestic and agricultural use.

Because the flow rate of aflaj is varied around the year, aflaj systems have been arranged in such a way that makes it easier for farmers to control draught. After domestic use, falaj water is first used to irrigate the permanent cultivated lands, mostly date palms, and then the seasonal cultivated lands, called awabi. Aflaj systems are also used for industrial and other purposes, such as to drive water mills.

Aflaj in Omancan be classified into three types depending on its source of water: ghaili, Iddi (daudi), and aini. However, the methods of administration and management are very similar. Only daudi type is similar to the qanat irrigation system of Iran. Comparable systems of irrigation to daudiaflaj have been or still exist in many places around the world, like Central and Eastern Asia, Middle East, South Europe, North Africa and the Americas, however it is called by different names.

Aflaj vary in size; from smaller ones owned by a single family to larger ones having hundreds of owners. Typical Omani falaj administration consists of a director, wakil, two assistants, arifs, one for underground services and the other for above ground services, banker, qabidh, or amin aldaftar, and labor, bayadir. The wakil is in charge of the overall administration of the falaj. Depending on the size of the falaj system, falaj can have the entire mentioned staff or some of them but at least should have a wakil.

Several ways are adapted for distributing water among farmers. The widest spread method uses a water share time unit called athar.In this method, the irrigation rotation, dawran, is divided to several days (normally 4 to 20 days). Each full day is divided into two baddas, daytime badda and nighttime badda. Each full day should have 48 athars, so each badda will have 24 athars. Therefore, athar is theoretically equal to 30 minutes.

As a rule, in the traditional scheduling method, the daytime badda starts at sunrise and ends at sunset, where the nighttime badda starts at sunset and ends at sunrise. Farmers were using several methods to verify the water share on the field, like estimating time or using the complex sundial and stars system. After the modern watch became available for farmers in first half of the 20th century, they start gradually to check the time using these watches, and they came to fully depend on these watches in some systems, by adapting first the Ghoroobi timing and then the Zawali timing.

The terminology and nomenclature of star system for irrigation and units for water share is too complicated and unorganized, as well its knowledge is disappearing. The traditional way of irrigation scheduling is differ from one falaj system to another. Even thought in most of the aflaj, farmers use athars as a standard unit, the way of inspecting the length of each athar is varied among different aflaj. There are always a lot of margins of un-accuracy in measuring water. In many cases, the watering-cycle does not match with the share-cycle. Farmers go through several steps to transfer from using traditional irrigation timing to modern watch.

Because the practical length of athar and the flow rate of aflaj are changing, farmers adapted many ways to ensure fair distribution of water shares among them. In the traditional sundial and star method farmers may have more or less water per athar. In winter, farmers irrigating at nighttime will receive more water than farmers irrigating in daytime and vice versa for summer. Farmers solved this problem by having another rotation within the dawran. It was a day-night rotation. Farmers act against the change in falaj flow rate by dividing the falaj into smaller streams, re-adjusting the dawran or store the falaj water in a big tank before irrigating.

The rainfall characteristics in Oman can be explained as happened randomly in space and time. Therefore, a perennial hydrograph is essential to understand falaj hydrology. In many afalaj, the dawran is adjusted according to the availability of water. In low flow the dawran is raised to more days and in time of drought it is redoubled to longer period.

The evapotranspiration is a function of time. For a perennial crop such as the date palm, the production cycle is repeated every year. Thus, the irrigation supply should be adapted to meet the continuous change of the crop water demand. Controlling the frequency of irrigation, flow rate and/or the duration of irrigation can make this adaptation. Unfortunately, in aflaj systems the irrigation rotation (dawran) is fixed for the whole year. The flow rate is govern by hydrological factors and the duration of irrigation, like the dawran, is fixed for each farm within the falaj cropping area.

Aflaj are smart human solution that made the living possible in extreme dry environments. These systems should be preserved for future generations in rural areas. Developing and keeping aflaj sustainable requires integrated efforts and research. One has to consider aflaj as hydrological, social, ecological and economical system. Development programs should be sensitive to the nature of aflaj societies. In this hydro-political systems, tribal thinking and behavior still dominating the aflaj society.

In general, the water quality of aflaj is good, however there is potential to be polluted from urban and industrial activities. More than one quarter of the aflaj have fallen out of use due to many social and technical problems. The government of Oman is making many efforts to conserve and maintain the aflaj.

It is recommended that the existing traditional water-share units to be converted to standard meridian time. As a result, it is necessary to document all water shares of aflaj, before further steps and big changes take places in the management or the social system of aflaj. The income of local people should be improved. Some suggestions are to store the aflaj water to make it available on demand of irrigation. Then, cultivating high value crops such as medical plants and herbs. Also, recreation activities could be introduced, like fish farming, swimming pools or eco-tourism.

Further research is needed to precisely evaluate the hydrological and agricultural system of aflaj. This requires measuring several parameters for long periods.  For falaj hydrological studies, rainfall, flow rate and wadiesfloods records are necessary. For detailed irrigation performance evaluations, on-field weather data should be measured with real-time soil moisture content in the soil within and below the root zone. For measuring the land use, high-resolution satellite images can be used, with images captured in each cropping season every year. A complete understanding of the aflaj water management may not be attained unless further measurements on water and soil quality are made, as well, economical evaluation of the input and output of the falaj system in connection to irrigation.